Which nerf gun should I buy? The best nerf gun to get 2021

So you’re new to Nerf Wars and now you need a blaster.  How do you know which to get? Where to start?  What is the best nerf blaster FOR ME?

My advice?  Don’t waste your time gooooogling “best nerf gun 2021” or “which nerf gun to buy” or watching all those youtube reviews until your eyes become all dried out and short sighted that you can’t aim properly at your target during the real nerf war.

Don’t even go on amazon and search up “nerf guns”.  As a first timer you need to see something physical.  Get away from the computer and go to Walmart, Cambodian Tire, or Toys Я US, use your Cart Boss to unlock a shopping cart, head straight to the nerf aisle, and look for something that catches your eye. 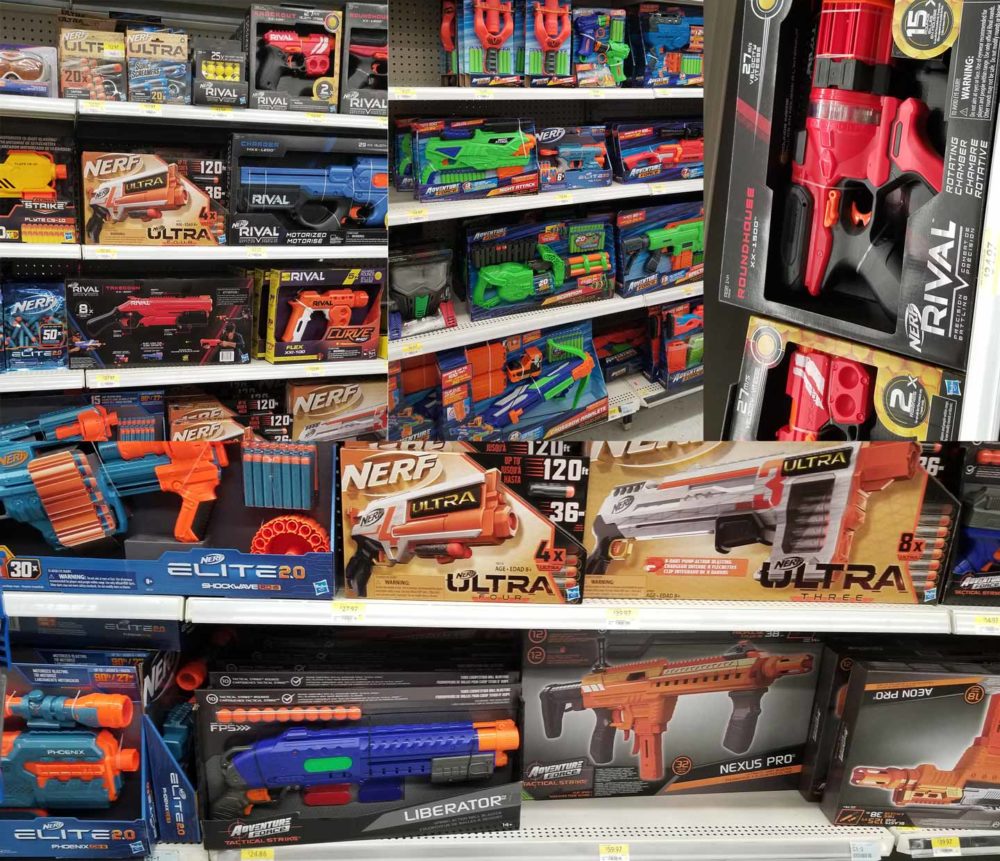 they ALL catch your eye.

So that’s also a problem.  Or, maybe a blessing.  Because the greatest thing about Nerf that separates it from pretty much every other sport including airsoft and paintball is the sheer VARIETY.  Like, not just the blasters, there’s all the other foam weapons, and also the game-modes, style of play, even the battlefield.  The combinations are endless.

Now, if you want something you can’t go wrong with – pretty much anything Nerf RIVAL branded will work great.  The ones that shoot the rounds.  They shoot the foam balls.  Easy to reload, easy to shoot, seldom do they jam like mag fed nerf guns, the mags are easy to load, easy to pick up (with a garden weasel), shoot really far, and do not need modifying  out of the box to be actually useful in foam combat.  And they don’t hurt much to be hit – the projectiles are 100% foam.  Well, maybe if you were shot in the balls, by the balls.

Now, you can choose manually loaded or magazine fed.  I would stay away from the magazines.  I like to just stuff my pocket with rival rounds, load my Rival Artemis ’till it’s full, and go to war with it.  Simple and effective. And cheap.  All you need are pockets.  No need for an army belt.

Once you throw in the mags – you need a belt holster to hold the mags.  And the mags cost money.  And the belt and holster costs money.  And they might jam.  Well, actually Rival round jams aren’t as common and dart jams.

Adventure force ball guns are good, but some of them aren’t.  If you get anything adventure force, stay away from the Sentry X2 and the Liberator – they belong on my sh!tlist. They are horribly weak.  That being said, it’d be interesting to see what happens if the spring was upgraded:

DON’T GET THIS (unless you plan to up the spring and tell me what happens).

Many nerf branded, mag fed blasters are crippled out of the box.  They need modifying, teching, engineering, upgrading, all that stuff.  Say the retaliator for example, it does not shoot far, but you can take a cheap one and mod it into a beast – change the spring, upgrade the seal, the plunger rod, breach, brass barrel, etc.

So this is why I would stay away from nerf branded blasters that are magazine fed .  Like this:

They will NOT work like magic outta the box.  They will not shoot too far.  Especially the old elite line, like Recon, Retaliator, Rampage, etc. Why don’t I like them? Because of all the mucking around you need to do out of the box, and the jamming.  It sucks.  More playing, less teching I say.  The more you play, the more you know what needs to be modified.  Play first, modify later, not the other way around.

Now if you really want something mag fed so you can do John wick stuff, go for either the nexus pro or the adventure force Aeon.  Those shoot pretty well.  And they are compatible with nerf mags (just need to cut the magwell a bit).

Now, if you like blasters that shoot darts, go away from mag fed and go for the front loaded ones.  The ones I like are the Nerf alpha strike QS-4 and the Nerf Triad.  The Nerf trio is the successor to it.  They shoot decently far.  But I lean more toward the Qs-4.  Because extra barrel and the dart doesn’t fall out as easily due to tighter barrels.  Front loaded meaning anything you load into the front.  Games where you will eventually run out of ammo like Humans vs Zombies (HvZ) you want to use a front loaded blaster with smart AR system.  So you can quickly pick ammo off the floor, load, and shoot your enemy down.  Mag fed blasters can shoot a whole 18 rounds , but you’re out of mags, your brain belongs to the zombies.

Yes I have won rounds of HvZ with only a triad.  A simple three barreled, front-loaded pistol.  Because I knew with my overvolted RapidStrike, there’s no way to sustain a long time with that.  Plus, you don’t need to spend the time fbefore the game to slowly load and load all those mags and carry all that  gear on your belt.  So if you’re just getting into nerf – ditch the mags.  Unless you are using the nexus pro or something like that, then the PITA is worth it.

Motorized.  The fully automatic or semi auto assault rifles.  Who wouldn’t want a machine gun?  Well, if you want to go motorized – choose Nerf Rival or Adventure force.  Don’t go for anything Nerf branded that shoots darts – ie nerf elite etc (unless you plan to modify it).  They aren’t powerful enough out of the box to be practical in a skirmish.

To make it useful, it requires modification by electronics soldering to accept a rechargeable lipo battery – can be a big job.  Might require some basic electronic engineering. Like what I’m doing here – soldering my rapidstrike (the same one many of you have seen me bring along): 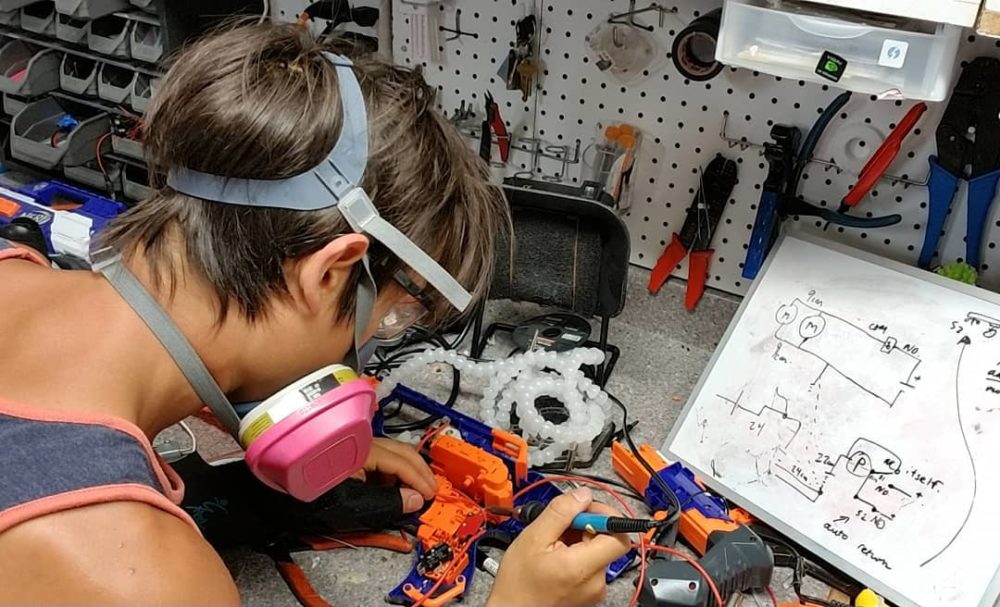 Also, don’t forget that the disposable batteries can be a pain in the butt, and the wallet.  They only shoot good enough for the beginning, wait a bit longer and the batteries become weak the more you use the blaster.  Also, darts don’t work in the nerf gun when wet.  The flywheel cannot grab the slippery wet dart to fling it forward, making the blaster jam and become useless.  Keep this in mind on a day if the ground happens to be wet.

Rechargeable batteries are an alternative, but they are 1.2V, not the 1.5 you get from alkaline, making the power ever so slightly lower, but, not really noticeable.

Ultra is stupid.  We won’t ever carry ultra ammo.  You’ll have to bring your own.  Plus it’s dark grey so good luck finding it.  And the ammo is expensive. If people shoot at you you won’t be able to pick their ammo up, load it into your ultra blaster and fire back.

Now I didn’t delve too much into the specific  nerf guns here, that’s because I just wanted to share my general rules for picking and choosing nerf guns.  So after you go to the store and see it all for yourself, then can you go back on the computer, phone, tablet, google glass whatever, and check prices and all that.  Later on I’ll review a few nerf guns on this blog, but for now, use my advice above for picking your weapons of foam.

And no, there is no absolute “Best Nerf Gun”.  But there are crappy nerf blasters that should only be bought if you wanna mod them.  There is a “best nerf gun for me in this particular game mode”, which is up to you.  Take the advice above and apply it to your own situation and style of play.  Are you strong enough to reload the heavy spring of the nexus pro, such that you can fire shots fast enough in succession?  Do you prefer to be more mobile at the expense of firepower and therefore prefer a more compact blaster like the qs-4?  Do you need to reload from the ground ammo fast during a game? If so, use a front loaded blaster like the RoughCut or the Trio/Triad.  Are you efficient with magazines, can you organize your gear on a belt, do you have mag holders?  Get the nexus pro (but only if you lift, BRO, because not everyone can pull that spring all the way back).

But hey, you can always come to a nerf war and rent our blasters for a low price, try them all out, see what kind you like, before actually purchasing them from the store!   If you’re wondering what to buy, come to a nerf war, see what people bring, and how they shoot!

and be the FIRST to know when the next set of events is scheduled.